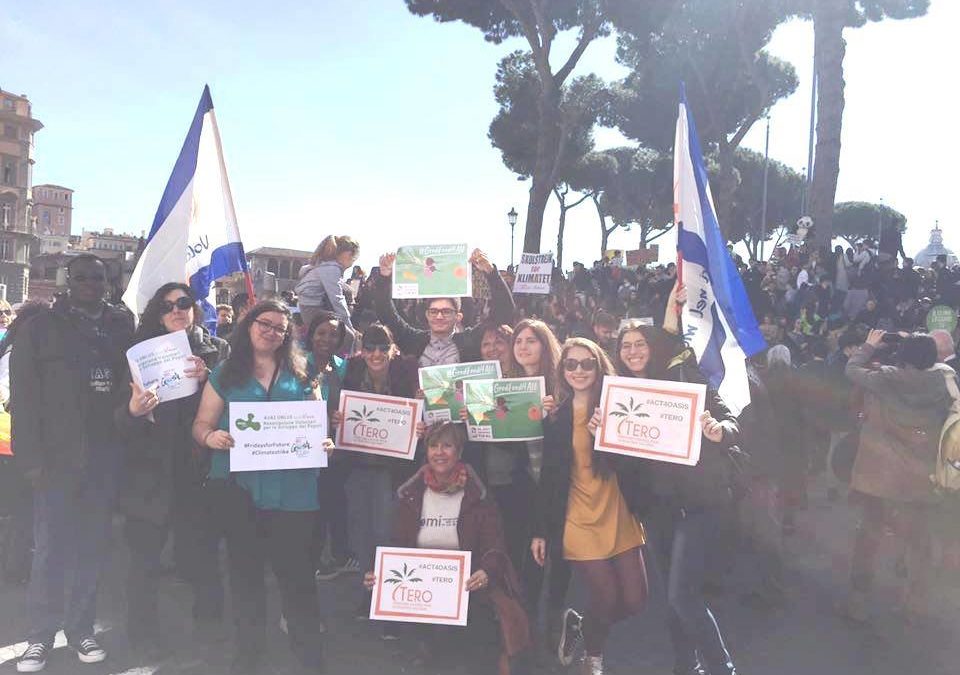 In the frame of the “global strike”, schoolchildren, high school students and students were invited to skip classes in order to challenge the government and civil society on climate issues. The “Fridays for the Future” movement initiated by the young Sweden Greta Thunberg (16 years old) has become a youth movement that has taken on a global dimension.

Her example of strike was followed in several countries, particularly in major European cities such as Copenhagen, Madrid, Berlin, etc. In Paris, thousands of students also marched on the Champs Elysées towards Concorde and Place de la République.

In the city of Rome, many young people marched on Friday, 15th of March 2019 for climate change. The demonstration began at around 11 a.m. in Madonna di Loreto square. Among the demonstrators, we could note the presence of FOCSIV, Volunteering associations and Development organisations (i.e. Apurimac Onlus, Avaz Onlus….), environmental associations, social movements and some individuals who walked to defend the climate and demand to act for the future of our planet.

The purpose of this strike was to fight for the preservation of the environment and young people asked the Government to urgently address climate change. On the one hand, it is worrying to see that young generations are forced to denounce the degradation of their environment because of adults, but on the other hand, it is also reassuring to see all the dynamism, the motivation and the passion they put into demanding a real policy to preserve the climate and ensure the future.

The marchers waved signs with evocative slogans in favour of saving the planet such as “Make Earth Green Again“, “Salviamo l’Umanità” or “Go Greta, save the planet“.  Focsiv also made signs with slogan such as “Good Food for All“, “Act4oasis” for the preservation of oases etc. Some young people also mentioned the problem of garbage in the cities of Rome and Naples and in many other Italian cities. Overall, there was a festive and awareness-raising atmosphere, but the march remains a little timid. A further demonstration is planned in Rome on 23rd of March against political inactivity in the face of climate change.

Hoping that all these significant events will have an impact on society and lead to more concrete actions by the Italian government and around the world, young people are planning to march again.