Testimony of the Campus, organized from 09 December 2019 to 02 January 2020 in Chenini-Tunisia, on community risk management of oases. 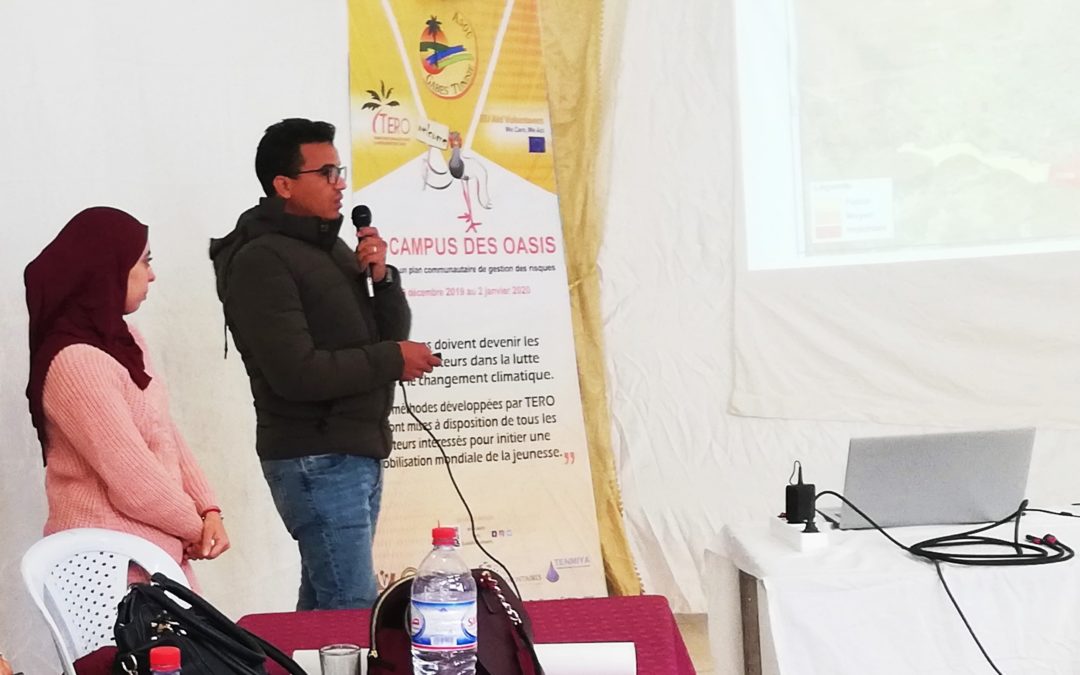 The Campus on community risk management in the oases, is an opportunity that allowed all the volunteers, coming from different Maghrib countries (Tunisia, Morocco, Algeria and Mauritania) and France, to identify and manage the problems to which it’s exposed the Chenini oasis, by applying the new technique MARP (Participatory Research Analysis Method). This work was carried out under the supervision of Tunisian research professors and the ASOC members.

The pre-campus phase consists in collecting the main data on the sources of risks damaging the Chenini oasis in order to carry out a complete analysis and propose solutions to these problems. This has been achieved in three ways, namely through literature review, consultation with the relevant administrations and a survey among farmers. The second stage involved the analysis of the data set collected by applying the MARP method to several themes (Biodiversity, Water, Soil, Plant Health and Surrounding Environment). This first phase was carried out by Tunisian and some French volunteers,  supervised by the researchers.

The campus period was characterized by the arrival of the other volunteers and the subdivision of the whole group into five small groups, each of which was made up of heterogeneous volunteers coming from various nations and having different expertise, supervised by one or two researchers. Each group tried, through a participatory approach, to analyse and deal with the specific theme according to the available data. The participatory work took place in a special atmosphere and in a suitable working climate, where each participant discussed and offered his or her contribution to the activity of the group. At the same time, several socio-cultural activities (traditional dishes) and excursions were organized to ensure some rest and energize the participants. At the end of the campus, a restitution day was set up, in the presence of researchers, farmers, representatives of Chenini’s administrations and some active members of the civil society, in order to present the main risks to which the oasis is exposed and to propose some solutions based on the MARP analysis. At the end of the presentations, the stakeholders tried to open a debate in which everyone gave his point of view, did some remarks and propose perspectives for future development. Before the departure of the volunteers, a closing meeting of the project was organised (and attendance statement given) in order to evaluate the campus for future improvement .

What I learned: the application of the MARP analysis to the oasis environment; participation in the realization of the participatory risk management plan of the oases; several information on biodiversity, phytosanitary and risks of the oases; working in a group setting and getting to know other volunteers of different nationalities, cultures and competences.

My contribution: like all the other participants, I offered my knowledge in geology and environment; data analysis and report writing; interpretation of graphs and figures; elaboration of thematic maps ; sharing knowledge about handling ArcGIS and Adobe Illustrator software with the rest of the group.

Strengths: Heterogeneity and complementarity between volunteers, group work, supervision of researchers, participation of farmers, dynamic of the work activity.

Area for improvements : Non respect of the program and time, non-integration of all volunteers, concentration of each group on its theme, language difficulties.

Recommendations and perspectives: involve and brief all volunteers at every stage of the project; target different volunteers with a variety of competences; develop and agree on a specific programme before the campus with the volunteers to involve.