The 2° consortium meeting of the TERO project in Gabès, Tunisia 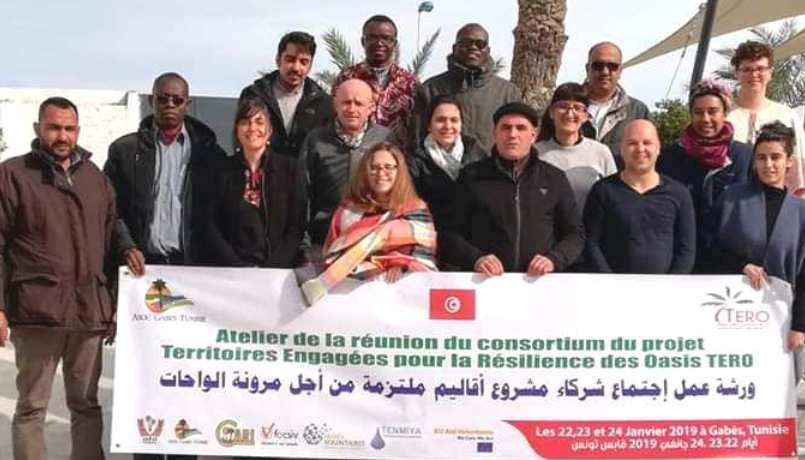 After less than 6 months after the previous meeting in Errachidia, Morocco, the members of the project “Territoires Engagés pour la Résilience des Oasis” – TERO met in the oases of Chenini, Gabès.

The TERO project aims at increasing young people commitment in the oases, particularly related to climate change issues. This project, coordinated by France Volontaire, produced  numerous activities over the last year of activity:

– training of associations on the mobilisation of young people;

– a survey on the level of commitment  of young people in the oasis communities;

– the implementation of a communication and training plan for the associations;

– the setting up of voluntary camps in the oases

During the three days of  consortium meeting, participants visited the sites of intervention of the Association de l’Oasis de Chenini Gabès and met the

volunteers involved in the activities.

The meeting allowed association to have an initial assessment of the past year activity at various levels: technical, financial and administrative, as well as to reflect together on future steps.

These days allowed also the representatives of the different countries involved in the project to share their experiences and to compare different points of view and ideas. Finally it was an opportunity to  work side by side to furtherly improvements of the project.

It was Nada BEN AHMED, coordinator of the TERO project in Tunisia, who told us about this meeting “It was a great opportunity to exchange information on administrative and financial procedures and to discuss important issues such as advocacy issues. Finally, our  colleagues were able to visit our beautiful oasis of Chenini. I am very satisfied with this meeting result, especially for the presence of the media (Radio Elyssa FM) that gave great highlight  to the event at the local level.